Essential Tools For The Running Writer

I find running works better than anything else at turning off the left brain, the critical part of your brain. I can be stuck in a rut of a scene or section of my outline, thinking my story sucks, then go for a run and a mile in I'll be smiling thinking "I love my story". Two miles in, I'll suddenly come up with some ways to fix it!

But memory retention seems affected by running too, so taking notes is crucial.

I cover the obvious use of a smartphone below, but I don't usually run with it because I like to run "unplugged". What I use instead is this: 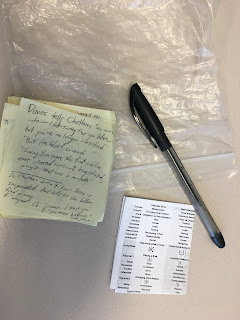 A simple combination of a pen and paper (a pad is nice, yellow stickies work fine, but even a sheet or two of folded paper will do in a pinch), and a ziploc bag to keep them in. This fits nicely in your shorts pocket so you don't even notice it. The ziploc is very important because it keeps out moisture: rain, your own sweat, sprinklers that you run through on a hot day, etc.

A pencil could also work, but pens tend to have caps or retract, while most pencils are bit sharp to run with in your pocket. Your call.

Dramatica aficionados might also notice the cute little storyform in the photo. I printed off my current story's Dramatica storyform really small and folded it up to be the same size as my paper. It's pretty easy to memorize your base storyform, but sometimes the more esoteric points like Catalysts or Signposts or especially PSR variations are cool to have on a run.

I don't like to sit down during a run -- it just feels wrong -- so when I get an idea that bears writing down I usually put the paper against a tree trunk, or a tall object like flat-topped garbage bin or something. If you don't mind sitting, a bench works fine. I've also tried lying down in the grass!

Don't feel you have to write down your ideas right away. Sometimes when running it's good to mull them over a bit in your head, they'll spark new ideas in the process. But once you feel like you might forget, it's probably good to record it.

I'll post another time about the best running pace for nourishing your muse.

Something you can't do well on a smartphone is draw a little sketch. I'm no artist, but lately as I've been trying to encourage my right brain in my writing, I've found the urge to doodle or sketch striking me more often. The doodling seems to coincide with my more productive creative days, too, when the words come easier.

Anyway, often on a run I'll see something that just looks neat, captures my attention and inspires me. Maybe I'll get some story idea about it, maybe not, but I just want to LOOK at it. If you have a few minutes to spare, this is a great candidate for sketching it down, giving your right brain a chance to play with it a bit more. Here's one I did of a neat looking lamppost: 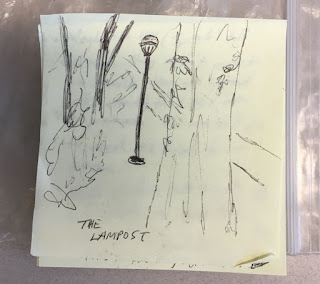 Sure it's no Picasso, but try that with a smartphone!


The Obvious Yet Awesome Smartphone 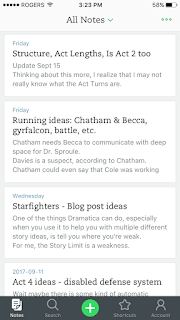 If you're a writer, you probably already use your smartphone to take notes when you're out. It's especially great for long walks, because a lot of good ideas come when you're out walking. The speech-to-text keyboard feature works great for getting thoughts down quickly. It also has the added bonus of garbling your less common words and especially your character's names, which is amusing afterwards. Sometimes its mistakes can even inspire more cool ideas!

I tend to use the Evernote app, which syncs well with my laptop and desktop computers. Quip is also another good app for writing, great for collaborating.

That said, I don't usually run with my phone. I like the feeling of being "unplugged" when I go for a run, and taking the phone defeats that. The exception is when I run to/from work with my backpack. Then I'll have the phone, and the speech-to-text keyboard saves a lot of time.