New Update (Nov 2021): I ended up letting the book sit until late 2019 while I worked on another project, and worked about 18 months revising it before sending it out for beta readers. It's now going to be a trilogy -- I had realized how well it would work as three books towards the end of the draft, and delivered it that way to beta readers. I was super excited with all the positive feedback I got from my betas, including the best praise of all: mild anger at stealing their sleep!

I've completed incorporating beta feedback into book 1, and started books 2 and 3. Now I've begun the querying process for book 1, where you try to find a literary agent who is a good fit for you and your book. Wish me luck! 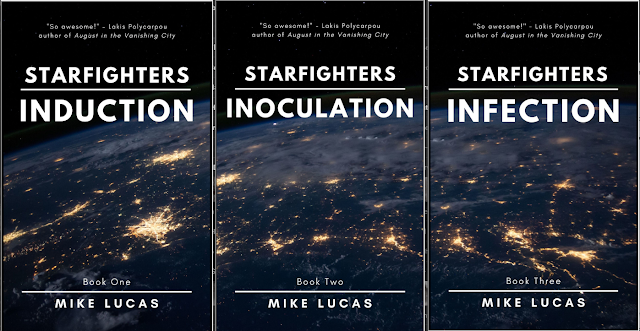 Imagine there is a galactic war against a terrifying, implacable enemy. But it's not "a long time ago in a galaxy far, far away" — it's happening right now, and getting closer all the time. On Earth a few beleaguered defenders struggle to keep humanity safe while maintaining the secret of the war's existence...


In Starfighters: Infection, a 200,000-word SF novel, I pursue the struggles of a few modern-day college students who join a mysterious society secretly participating in a galactic war against an implacable enemy called the Unworlded — aliens capable of possessing other life. When the ploys of the alien infiltration team succeed in leaving Earth undefended, only Devin Harrison, a hopeful, romantic track athlete, can save the beautiful, conflicted Becca Conley from the aftermath of her own treachery and find a way to defend Earth from alien invasion. The novel explores the terrible choices we face when our devotion to the people we love is pitted against the greater good, and the depths of human spirit required to overcome betrayal and find redemption.

The above summary sentence, "Recruited in secret...", is actually a technique from How To Think Sideways called The Sentence. You can learn more about my Sentence and how it ended up meshing with my Dramatica storyform here: Narrative Structure In a Single Sentence.

You can find the full Dramatica storyform for the story here: Starfighters Storyform.