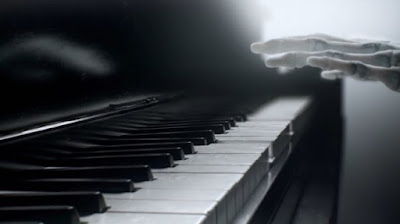 Now that I've only got two episodes left to watch, I'm pretty sure on the general area where Westworld's storyform lies. The funny thing is I'm not certain on the Throughline Domains, but I think that will become clear once I finish the season. (It's also been tricky figuring out who are the Main Characters, since there seem to be at least two -- Dolores and Bernard. I've wondered about Maeve too -- her flashbacks to her child being killed -- but Maeve seems mostly an Overall Story character, perhaps the Protagonist.)

For now, I'm guessing the Overall Story Domain is Manipulation (also known as Psychology) -- there is just too much behind-the-scenes manipulation and scheming going on. In fact if you watch the opening sequence with the piano that continues to play after the skeleton-host's fingers pull away, something about that screams Manipulation to me. The music too, something very spooky and psychological about it.


Inertia and The True Nature of Things

Anyway, there are two things in Westworld that have stood out to me from the very beginning:
In Dramatica, point 1 describes the Inertia element to a tee, while point 2 describes the State of Being variation. And what's really incredible is that, in the Manipulation domain (which is where I think the Overall Story lies), Inertia fits within State of Being! Or another way to put it: if Inertia features in the problem quad* of a Manipulation Story, Dramatica tells you that the Overall Story Issue must be State of Being. Isn't that incredible!
In fact, it's a point that even someone without knowledge of Dramatica can understand and realize, "whoa, there must be something to this Dramatica theory". That's exactly what happened when I was chatting with my brother Rob about it: 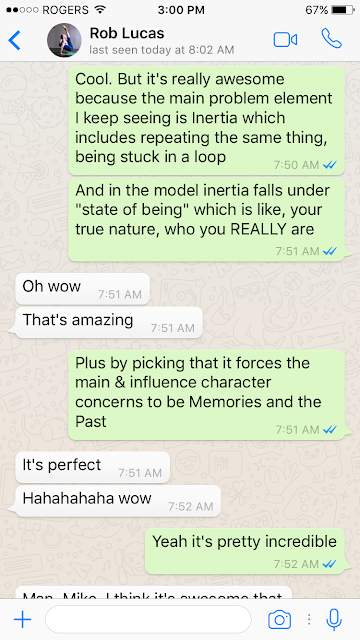 And what blew my brother away even more, once you decide that Inertia and State of Being figure into the story somewhere, Dramatica says that both Memories and The Past will be super-important concerns in other throughlines. (This is true even if I got the Domains wrong.) If you've seen Westworld, you know that Memories and The Past are incredibly important concepts in Westworld; they come up all the time and drive all sorts of conflict.


* At this point I'm not certain whether Inertia is the Problem or Symptom, or I guess possibly even Response. I'm guessing Symptom, since the characters seem to be quite aware of it and consider it a problem. And they respond by Changing -- trying to Change their lives, to Change things around them, to become better or different...