In this post I'll examine the difficulties I had in determining the Story Driver for my story, in the hope it may help other writers who aren't sure of their own Story Driver. At the end I present a couple of techniques to help figure out your driver.

For a while in the outlining stage of my current project, I kept flip-flopping between the two choices for Story Driver: Action or Decision.

For those new to Dramatica, it can seem pretty amazing (and maybe hard to believe) that for any complete story, you can either have actions driving decisions, or decisions driving actions -- but not both. I don't think any other story gurus or theories even talk about this, let alone understand how it impacts the rest of the narrative.

For a finished story, it's usually not too hard to figure out the Story Driver. An important event that wasn't precipitated by a decision usually sticks out in an Action story, for example -- something like a meteor strike, a car crash, or other accident. (Those kinds of Actions often can't be driven by decisions, unless there's focus on the decision to provoke an accident.) Similarly, in Decision stories you'll have characters making decisions, sometimes in groups, where their particular choice wasn't forced by anything. In The Fugitive, the jury didn't have to find Dr. Kimble guilty, nor did Dr. Kimble have to return to the hospital that was his old stomping grounds.

(As an aside, I just realized that Empire Strikes Back, though not a complete narrative on its own, is almost certainly Decision driven. Admiral Ozzel's dumb decision to bring the fleet out of lightspeed too close to Hoth forces the Empire into a ground attack. Luke decides to investigate the probe crash. Han decides to go back for Leia, decides to enter the asteroid field, decides to go to Lando for help. Luke struggles with his decision to leave Dagobah to rescue his friends, etc.)


Stories In Development Are Harder

But that's for stories that are already written. For a story still in development, it can be much trickier. I can often picture my story both ways:
With those examples, it seems pretty obvious that the Actions are driving the Decisions, but that's because I'm over 50K words into my story now and I've already written it as Action-driven. When I originally tried storyforming (still in outlining stage), I actually thought Decision was the driver!


Technique One: Boxes and Ovals

Here is a little sketch I did to help determine both my Inciting Event (First Driver) and the type of Story Driver I had. Rectangular boxes are Actions, circles/ovals are Decisions. (click to zoom) 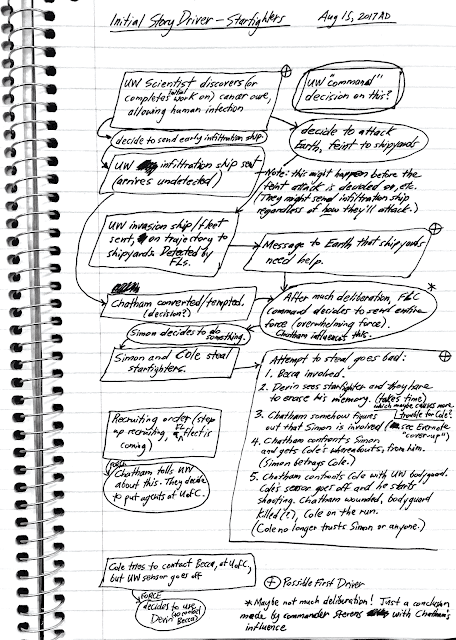 You can see the decision marked with the asterisk was problematic for me, kind of a blind spot. Everything else seems Action-driven but focusing on that as a big debate whose outcome was a product of the debate itself, and not at all forced by the "message from deep space" Action, was causing my narrative to lose coherence a bit -- making me question my storyform.

I realized it made the story stronger to consider that decision as being forced by the preceding Action and by the OS characters' problematic drive of Help (Overall Story Problem). So there was no big debate -- the characters in charge were forced to do what they did by the Action.

You may find it helps to make a similar sketch of all the events surrounding (leading up to and stemming from) your story's First Driver. Or your candidate First Drivers, if you have several in your head. Be open and don't try to limit it to only one or the other, just jot them all down and then try to figure out what causes what.

Another thing you can do is to make a list of all the "important events" in your outline, the big scenes that really push things along. Perhaps you already know some of these are your Act Turns, but you aren't sure whether they're Action or Decision driven. Or perhaps you just have a bunch of cool stuff happening, without any idea of where the Acts are turning. That's okay too, since the Story Driver is still applicable within each Act.

Once you have your list, go through it twice, advocating once for Action as the driver, and once for Decision. Jot a sentence down for each "important event" justifying each driver. (Make sure you do two whole passes; your mind will get confused if you keep switching your argument over and over.) For example:
As you proceed, you should find that advocating for one is easier than advocating for the other. On the one hand you'll be clarifying; on the other, rationalizing. In my example above, it's difficult for me to come up with good rationales for Decision driven, I can't even do it without writing question marks everywhere. Meanwhile, the Action driven rationales just flow perfectly. And while I've already written the first two scenes, the third one is still a couple hundred pages away -- and that scene sentence hasn't changed since before I figured out my storyform.

Do you have another technique to determine Story Driver for a story still under development? I'd love to hear it!
Labels: action decision dramatica driver story driver