The below story was originally published in Holly Lisle's flash fiction anthology, It Happened In A Flash (e-book available for free on Amazon US). 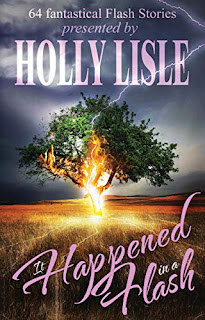 Give it a read and let me know what you think. There are some Dramatica-related comments afterwards.


“Be careful,” Annie told me. Young and thin, she hid her pretty face behind too many piercings. “One slot isn't enough. You never know when you're truly safe.”

The rain swept through the alley, stung my cheeks. “How do I get more?”

She shrugged. “I'll let you know when I find out—in another life, of course.”

I laughed, bid her goodbye, and promptly forgot her warning. Like Annie, I was a god. Nothing could touch me.

I'd become immortal on a Tuesday in April, though I didn't realize it for months. An underground gamer, I logged onto a Linux server with no domain, just a secret IP, and tried a mysterious game called Saveyour. Text-only, but rumoured to blow your mind.

I hit Y and it responded, Game saved. But that was it; there was nothing else. A complete bust.

Months later, working as a bicycle courier, I coasted up to a red light, pedalled hard when it changed to green—and was broad-sided by a Cadillac SUV running the red.

I blacked out and dreamed of the game's blinking text. Resume saved game? it kept flashing. I hit the Y and awoke, screaming and disoriented, at my computer.

What the hell? Had I fallen asleep at my screen, dreamed the accident?

Then I saw the date in the corner: Tuesday, April 17.

I'd died, and Saveyour had brought me back—to the very moment I'd saved my game.

For countless weeks afterwards, I savoured the delights of immortality. Risks and repercussions meant nothing; when necessary I'd return to April seventeenth, ready for another go.

Until I met Annie again, told her of my adventures. She laughed at me. “Don't you want to build something? Don't you desire something greater?”

That gave me pause.

“I understand your reluctance,” she said. “It's why I hoped for another slot. With only one, you're tempted to save after every gain, but what if there's a setback around the corner?”

Annie's ideas planted a seed, and one day from across the street I saw Melissa, as tall and sensual as I remembered. I still felt the pain of her indifference.

In college I'd never had a chance with her—but now I had infinite chances. Carefully, painstakingly, I made her love me.

“Of course. I just have to save something first.” I connected to the game and pressed the Y, savouring the moment.

The crack of a gunshot sounded, harsh enough to pierce my soul. Melissa hit the floor and I turned to see Annie, her gun trained on me. “I figured it out,” she said. “If you don't resume, I can take your slot.”

“Never,” I said, and she pulled the trigger.

She's killed me a hundred times since then. I keep hoping for a way to escape her, but it's getting harder and harder to resist the N. ~

I wrote the first draft of the story without any thought to a Dramatica quad or PRCO. I think I considered some quads afterwards during revision, but never totally settled on one.

That was back in summer of 2017. Recently I was giving it some thought and decided the quad that the story deals with is Consider, Reconsider, Conscience, Temptation...

Except that there is no such quad! Oops!

It took me quite a while to realize there's another quad that fits much better: Protection, Inaction, Production, Reduction. To wit:


It's also cool that the quad comes under Expediency -- which Dramatica defines as "most efficient course considering repercussions." The story is about what happens when you think there are no repercussions to your actions. And what you should or shouldn't do in that case.

For PRCO, I'd peg them in the order shown above. The Potential is Protection -- the whole reason the story exists is because the Saveyour game protects you from death and making mistakes; and Annie is driven to protect herself even more.

The Resistance (what makes things better or worse) is Inaction -- ignoring Annie's warning makes things worse, as does the car that doesn't stop for the red light.

The Current is Production -- the main character starts off wasting his gift, producing nothing at all. Then Annie gets him to build something in his life, but really she's trying to gain a new slot for herself.

Note I had some trouble distinguishing between Inaction & Production for Resistance and Current. I think I got them right there, but it's sometimes tricky (and for the story what matters is that they're both present).

The Outcome is definitely Reduction -- he's reduced from a god down to nothing, just one last choice -- pressing the N.

I'm not entirely happy with the "placement" of Annie at the end, she sort of appears out of nowhere. My idea was that she was shadowing him and knew when he would propose -- maybe she even asked the happy couple where and when he popped the question, then resumed her game which she'd saved prior to the proposal. So then she snuck into their apartment ahead of time and hid until he pressed the Y.

With 50 more words or so I could have illustrated that a bit better, but I did my best with the 500 limit!